UPDATE: Listen to the interview with Guro Harley Elmore here -> 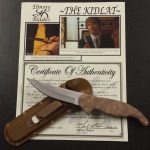 Below is a behind-the-scenes shots of Guro Harley working with the actors on set. He taught a control/disarm/takedown for a fight scene with Danielah Ruah, Mercedes Mason who also stars in Fear the Walking Dead, and Luis Moncada (one of the twin hit men from Breaking Bad!).